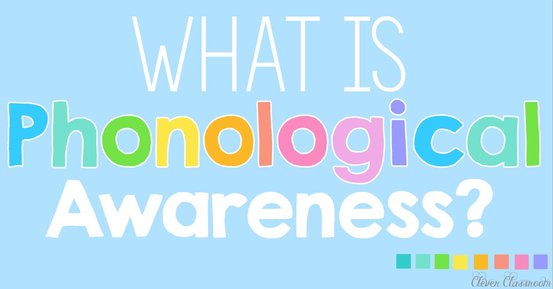 Phonology= Phono + logy; Phono means sound, logy means study of. Phonology is the study of sounds.
What is Phonological Awareness?
•Awareness of sounds in a language
•Awareness of rhymes
•Awareness that sentences can be broken down into words, syllables, and sounds
•Ability to talk about, reflect upon, and manipulate sounds
•Understanding the relationship between written and spoken language

What are Phonological Awareness skills?
• Detecting rhyme and alliteration (use of similar consonants)
• Identifying rhymes and words that start/end with the same sounds
• Segmenting words into smaller units, such as syllables and sounds, by counting them
• Blending separated sounds into words
• Understanding that words are made up of sounds represented by symbols or letters
• Manipulating sounds in words by adding, deleting, or substituting

FOR MORE INFORMATION AND ACTIVITIES FOR PARENTS